In this guide you will learn about all three.

Migrating From Other Providers

When migrating from another provider, there are a few things to consider:

The self-service data import discussed in the next few sections covers the first two. For customization, see our customization guide.

While FastComments Support can help with migrations, most can be performed and monitored easily without any intervention of support staff.

We natively support importing exports from the following providers:

By navigating here we can upload the file containing the data to migrate.

FastComments uses a job processing system for processing imports and exports. Once the system has picked up your job, it will periodically report the status of the job in the import or export UI. 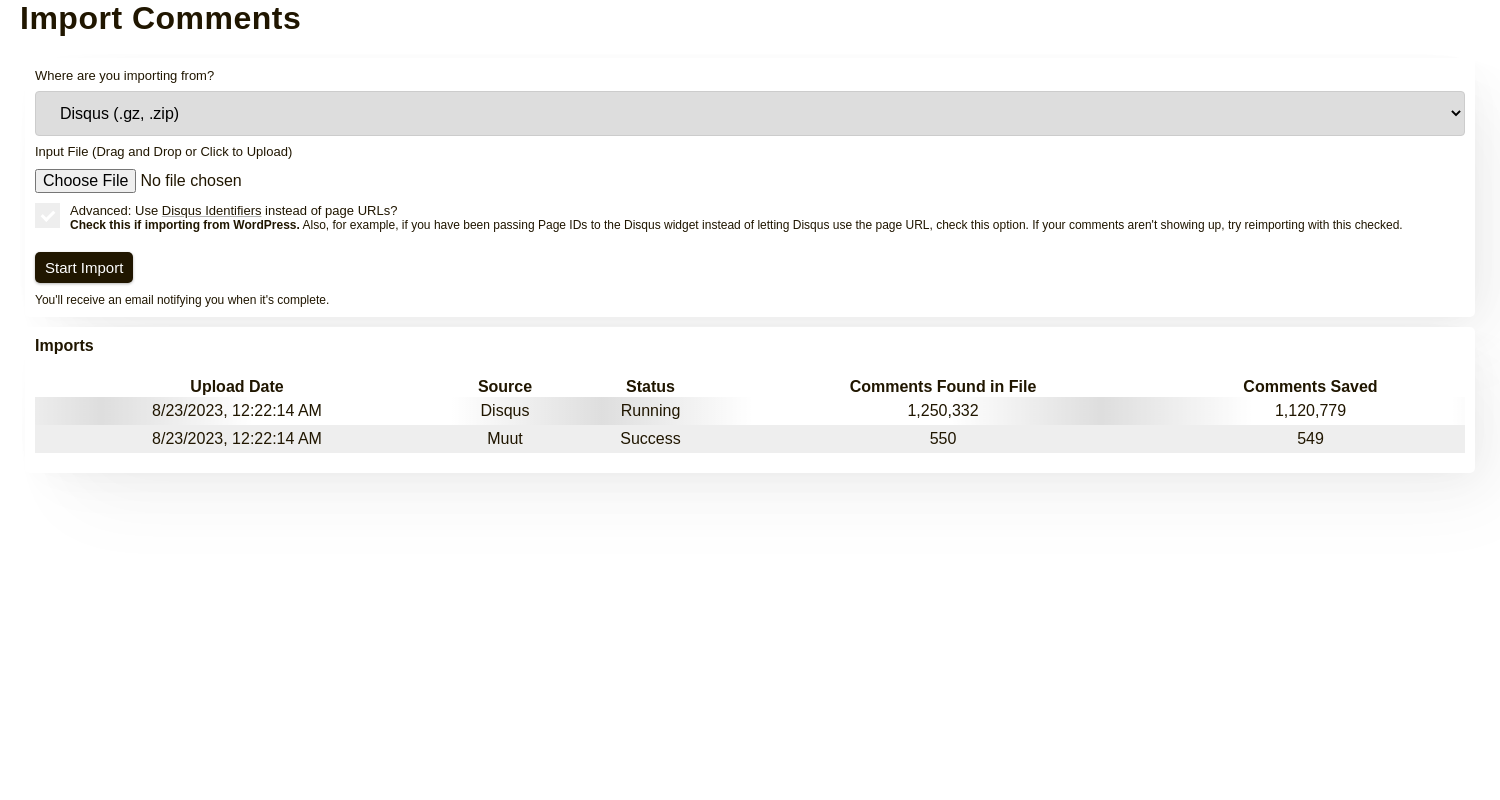 Note that the status for Imports and Export are viewable by all administrators in the account.

If your job fails, it will not automatically be restarted. The import will have to be attempted again. If any import or export fails, our system administrators are automatically notified. If we identify an issue, we'll reach out to you to see if we can help.

During some migrations, it is necessary to run the import multiple times. For example, it is common to do a first pass migration for testing, and then run the import again with the latest data before flipping the switch.

Our WordPress Plugin has a powerful UI-based importing mechanism. Upon installing the plugin, it will guide you through linking your WordPress installation with FastComments and copying your existing comment data over.

This is done without copying or downloading anything manually.

The migration process will be indicated to you via the UI during the migration. Most migrations only take a couple of minutes.

The mechanism is designed to not put excessive load on your WordPress installation during the migration.

In order for the automated WordPress setup to work, we have to make calls to your WordPress installation. Firewalls like Cloudflare may block us and cause the integration to fail. In such cases, we can provide you with a set of IPs to whitelist for the integration.

In the case of our WordPress migration, any new or updated comment data is automatically synced back to your WordPress installation behind the scenes. This means that, while the comments are served by FastComments itself to take load off of your WordPress deployment, we also save them in your database as a backup. This also means if you desire to switch away from FastComments, your data is already migrated and up to date.

With FastComments, many users can be added to your tenant, and their permissions can be setup based on the roles in your organization. 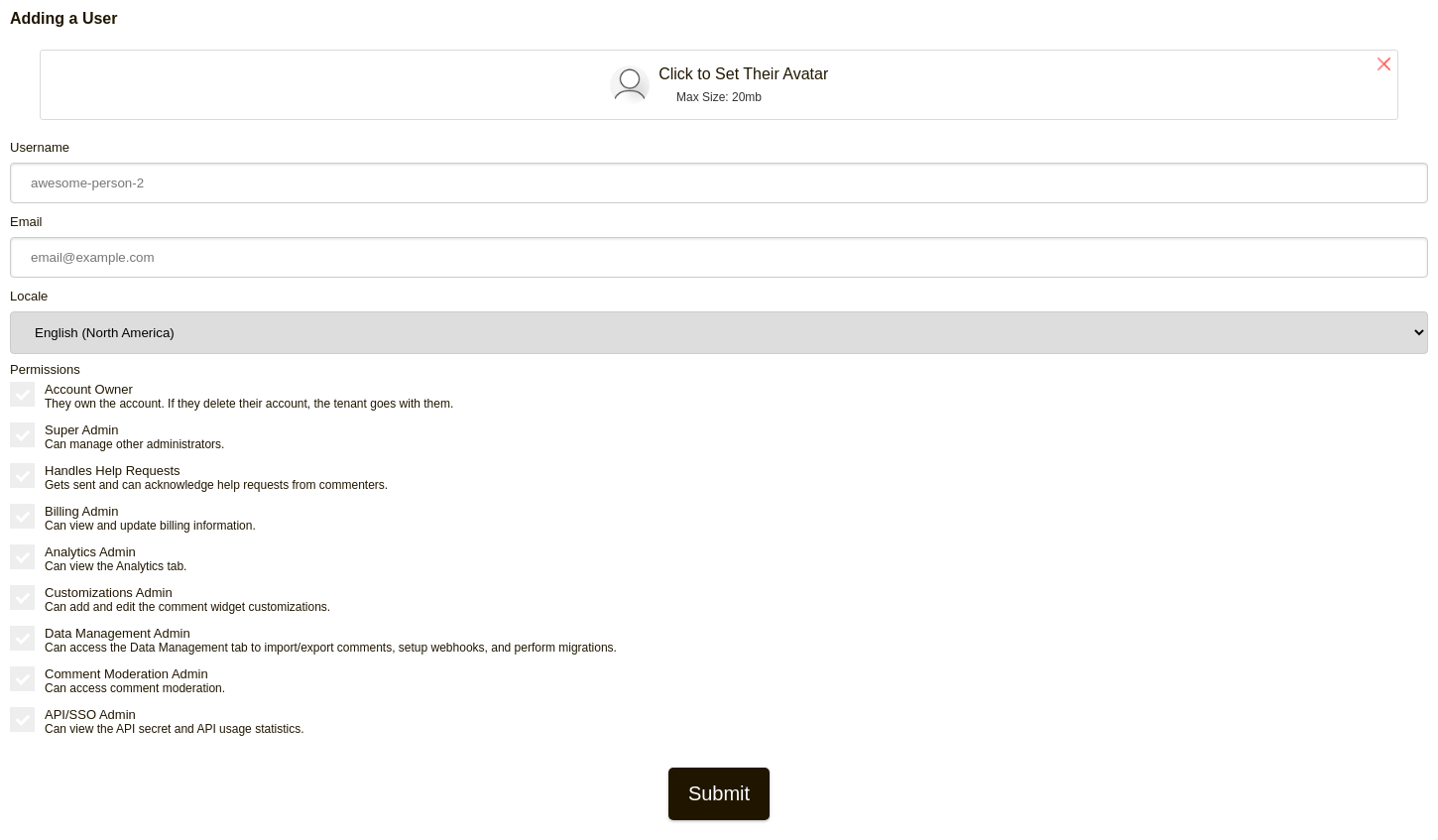 Users can be added via this UI. If you have many users, we can import them for you via customer support.

A Note about Authentication

Your users may be looking for a place to enter their password. FastComments uses "magic links" for logging in - so no passwords are required.

FastComments provides an automated way for you to migrate your comments across domains.

The domain migration simply requires a from and a to domain.

This moves comments, it does not copy them. If you wish to copy comments, reach out to us. 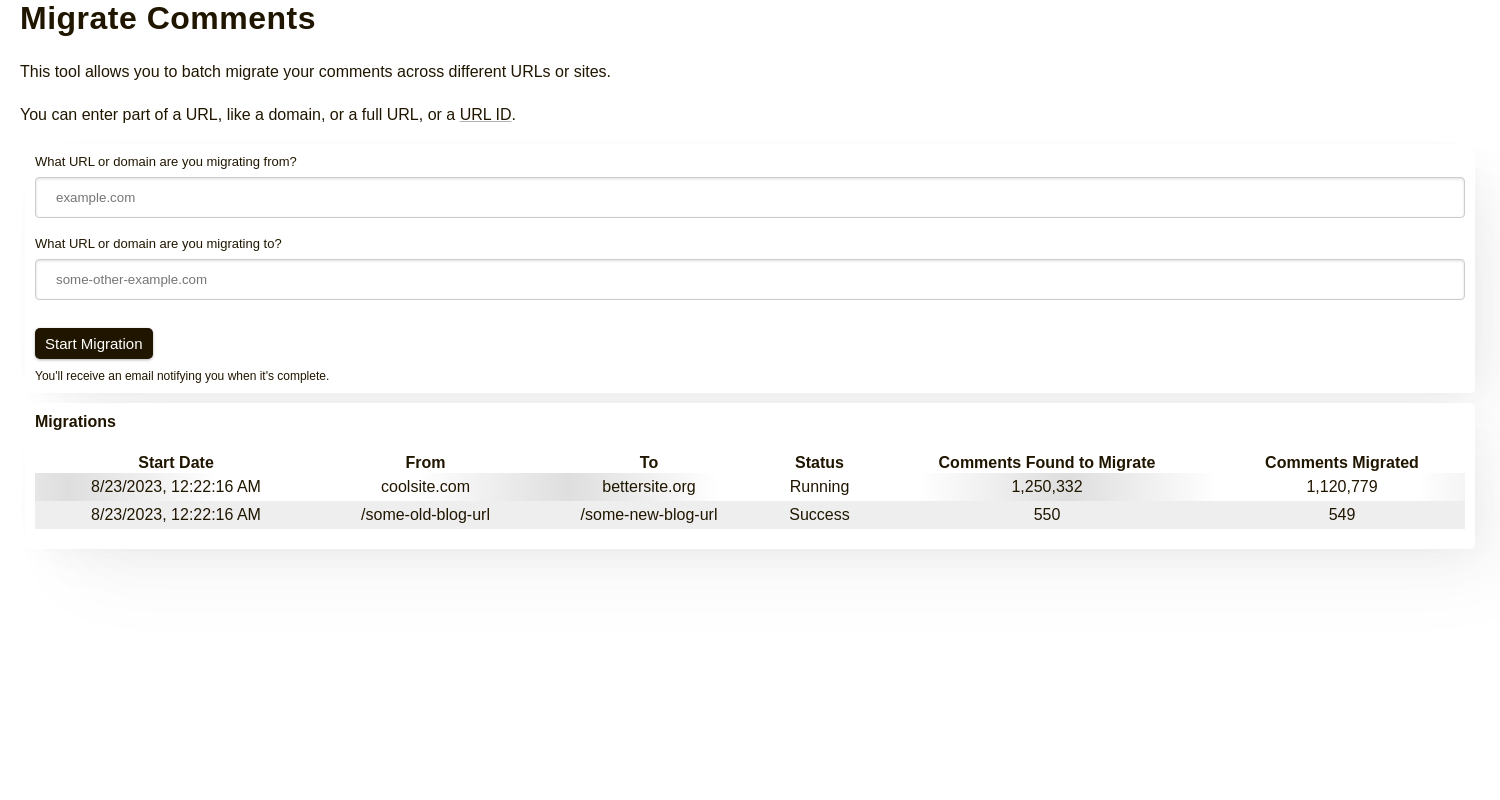 This is also useful for example if part of your migration to FastComments involves migrating from a different provider, so your comment import data may contain data that needs to be migrated. In this case, you can run the import, and then the domain migration.

There may be a delay before your migration starts. This is normal, as it the system checks for new jobs to process periodically.

As the job runs, it will display the number of comments found to migrate, and the number migrated thus far.

While its name is the Domain Migration tool, it can also be used to migrate comments across individual pages.

Simply enter the old and new urlId values in the from and to input fields.

In the event that data needs to be moved around, FastComments provides a self-service tool for moving comments between pages and articles.

Filling out the "From" Fields

To decide where to move comments from, we simply need to know the source URL ID.

If you aren't passing a value for urlId in the comment widget configuration, then this will be a "clean" version of the page URL.

You can see what values your comments have for URL ID by exporting them.

Filling out the "To" Fields

To decide where to move comments to, we need to know the target URL ID and URL.

The URL ID will be the bucket that the comment goes in. The URL field is used so that you can navigate directly to the comment from emails and moderation tools.

If you are using WordPress, you would for example enter the Article IDs in the To/From URL ID fields in the migration tool, rather than a URL.

All comment data can be exported from our platform in CSV format.

Note that dates in this file will be in the UTC timezone, in ISO format.

If you are looking to periodically pull data from FastComments, we suggest using Webhooks.

In the case of WordPress integrations, FastComments automatically syncs the data back to your WordPress installation periodically. Because of this, migrating from FastComments means you simply have to turn it off.